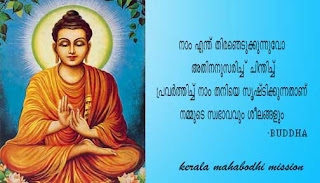 Posted by HARIDAS BODH at 4:53 AM No comments:

Posted by HARIDAS BODH at 4:33 AM No comments:

The Blessed Buddha once said:
I am a friend and helper to all,
I am sympathetic to all living beings.
I develop a mind full of love and am
one who always delight in harmlessness!
I gladden my mind, fill it with joy,
and make it immovable and unshakable.
I develop these divine states of mind
not cultivated by simple men.Theragatha 648-9

A friend, who always lends a hand,
a friend both in sorrow and joy,
a friend who offers good counsel,
a friend who sympathizes too.
These are the four kinds of true friends:
One who is wise, who have understood much,
will always cherish and serve such friends,
just as a mother tends her only child. DN III, 188
Among tigers, lions, leopards and bears I lived in the jungle.
No one was frightened of me, nor did I fear anyone.
Uplifted by such universal friendliness, I enjoyed the forest.
Finding great solace in such sweetly silenced solitude…Suvanna-sama Jataka 540

And how does a Bhikkhu abide with his mind imbued with friendliness
extending overall? Just as he would feel friendliness on seeing a dearly
favourite person, exactly so does he extend this same loving-kindness to
all beings in all eight directions, one by one, and as above so below.Abhidhamma Pitaka: Appamañña-vibhanga

All-Embracing is Infinite Friendliness J _/\_ !
Have a nice & noble day!

Friendship is the Greatest! Bhikkhu Samāhita _/\_ ]
http://What-Buddha-Said.net
Posted by HARIDAS BODH at 3:55 AM No comments:

The Ease of Serene Forest Calm:

A radiant deity once asked the Buddha:Those who dwell deep in the forest,
Peacefully living the Noble life,
Eating only a single meal a day,
Why is their appearance so serene?
The Blesses Buddha responded:They do not trouble over the past,
Nor do they crave for any future,
They live just with what is present,
Therefore are their looks so serene!
By urging towards the yet unreal future,
By longing back into a forever lost past,
Fools verily dry up and wither away,
Like a green creeper cut at the root...

Solitary serene calm is Bliss in the Forest!
Have a nice & noble day!

Friendship is the Greatest! Bhikkhu Samāhita _/\_ ]
http://What-Buddha-Said.net
--
Posted by HARIDAS BODH at 4:45 AM No comments:

Indian Pilgrimage: A peep into life of Buddha

Deccan Herald
Sanjay Pandey
March 31, 2013
Lucknow
It enlightens those who are in quest of the truth and for the religious minded and pilgrims it provides a peep into the different aspects of life of the man, who, about 2500 years ago, abandoned worldly pleasure for spiritual quest.
During its seven-night-and-eight-day long journey, the Mahaparinirvana
Express, the special train for the followers of Buddhism, takes the tourists to the most important spots dealing with life of Lord Buddha in Bihar, Uttar Pradesh as well as Nepal.
According to Railway officials, the train, which operates twice a month, begins its journey from Delhi’s Safdurjung railway station in the evening. The journey will take the travellers to the places where Buddha was born, attained enligh­tenment, delivered his sermons and died though not in that order.
This package trip starts with a visit to Gaya in Bihar from where the travellers are taken by road to Bodhgaya, about half an hour’s journey from Gaya, where the Buddha, who then was Siddhartha, had attained enlightenment while sitting under the shade of a peepal tree.
Then the tourists  are taken to the Mahabodhi temple in Bodhgaya that also has the Bodhi tree.  It is believed that 250 years after the enlightenment of Buddha, emperor Ashoka had visited Bodhgaya. He is considered to be the founder of the original Mahabodhi temple. It consisted of an elongated spire crowned by a miniature stupa and a chhatravali on a platform.
It is said that with the decline of Buddhism in India, the temple was abandoned and forgotten, buried under layers of soil and sand. It was restored by Sir Alexander Cunningham, the British archaeologist, in 1883.
The tourists also get a chance that many would crave for. As a part of the tour, people are taken to Nalanda so that they will get an opportunity to peep into the ruins of the famous Nalanda University, considered to be one of the oldest in the world, and Nalanda Museum. Then, the tourists are taken to Sarnath, about 15 km from Varanasi, as the part of the package. It’s a place, where Buddha, after attaining enlightenment, had delivered his first sermon or “set in motion the Wheel of Law.”
Ashoka had also visited Sarnath aro­u­nd 234 BC and erected a stupa there.
Sarnath today presents the most expansive ruins amongst the places on the Buddhist trail. It is now home to India’s tallest statue of Lord Buddha at 80 feet, built in an area of 2.5 acres and consisting of 815 stones.
Ganges is always an attraction for the tourists, irrespective of their religious
affiliations. And so the Mahaparinirvana Express travellers also get to enjoy the boat ride in the holy river and witness the grand “Ganga Arti” at the ghat in the evening.
Besides, Varanasi ( also known as Kashi) is the holiest of the seven sacred cities in Hinduism and Jainism. Hindus believe that death at Varanasi bring salvation. Most Hindus pray and wish to visit the town at least once in their lifetime.
The travellers will get a chance to visit Kushinagar, about 50 km from Gorakhpur. Here Bhagwan Buddha delivered his last sermon in which he reminds people that “all competent things are subject to decay…work for your salvation in earn­est”. At Kushinagar, an over six-metre terracotta statue of the Buddha lying on his side tells of a peaceful death (maha­nirvana). The Buddha died when he was nearly 80, but not a wrinkle mark is on the face of the statue, which has since been painted in gold colour. (The red of the terracotta peeps through from the base.)
It is said that after the cremation, a skull bone, teeth and the inner and outer shrouds remained. There was a fight among his followers for the relics. To avert a conflict, a Brahmin, Dona, sugge­sted an equal, eight-fold division of the relics between them. Some records state that, in fact, his remains were first divided into three portions, one each for the gods, Nagas and men. The portion given to humans was then subdivided into eight. Each of the eight people took their share to their own countries and eight great stupas were built over them. These relics were again subdivided, after Ashoka decided to build 84,000 stupas. Today, they are contained in various stupas scattered across Asia. The travellers also get a chance to visit Lord Buddha’s birthplace, Lumbini, which is located in Nepal. The pilgrims here get to see the large stone sculpture which show the baby Siddhartha emerging from his mother’s side.
Lumbini is considered the Mecca of every Buddhist, being one of the four holy places of Buddhism. The pilgrims are also taken to Shravasti, a town in Uttar Pra­desh, where Buddha is said to have spent 24 monsoons.
The travellers also get an opportunity to visit Agra to see the world famous Taj Mahal, the monument of love. It is important that Buddha too had spread the message of love and peace. It will be an added attraction as many world leaders make it a point visit this place and get their photos clicked to be kept in their album.
The tourists also get to see some of the ruins of Buddhist monasteries located in Udaigiri, Ratnagiri and Lalitgiri in Odisha.
sourse: BUDDHIST ART NEWS
Posted by HARIDAS BODH at 4:35 AM No comments:

The Detrimental & Advantageous topics of Conversation:

The disadvantageous subjects of bestial conversation are:
conversation about kings, robbers, & ministers of state, armies, alarms, & battles, food & drink,
clothing, furniture, garlands, & scents, relatives, vehicles, villages, towns, cities, the countryside,
women & heroes, the gossip of the street & the well, tales of the dead, tales of diversity,
the creation of the world & of the sea, talk of whether things exist or not.

Friendship is the Greatest! Bhikkhu Samāhita _/\_ ]
http://What-Buddha-Said.net
Posted by HARIDAS BODH at 4:29 AM No comments:

The brahmin Māgandiya once asked the Buddha about how to detach:

Question: How does one quench all this urge of craving and clinging?

Answer:
One should stop all mental diversification and proliferation by giving up the
conception "I am"! This internal craving for existence should be dispelled...
Whatever theory one understands should neither induce pride, nor thereby
regarding of 'Me' as better, worse or equal to anyone. When contacted by
various forms, one should not form a mental image or concept about a self!
Such friend is at peace within himself & need not seek peace from another!
He neither takes up, nor lays down anything. Therefore he cannot be moved!
He does not desire any sights, sounds, flavours, amusements or common talk.
He would not cherish or delight in any phenomena at all, in the entire world...
When affected by pain, he does not lament, nor does he long for survival or
tremble, when in great danger. He would not accumulate anything, whether
things, eatables or clothes. Nor is he afraid of not receiving or loosing all...
Such Bhikkhu is a meditator, not foot-loose, pure, not negligent, dwelling in
remote lodgings, where there is little noise & no disturbance from company...
Sutta-Nipāta 915-925 Edited excerpt.

Quenched!
Have a nice & noble day!

Friendship is the Greatest! Bhikkhu Samāhita _/\_ ]
http://What-Buddha-Said.net
--
Posted by HARIDAS BODH at 4:27 AM No comments: