The Evaporator of all Evil States of Mind!

Friendship is the Greatest! Bhikkhu Samāhita _/\_ ]
http://What-Buddha-Said.net
Posted by HARIDAS BODH at 6:29 AM No comments:

Buddha Poornima day Celebrated at Palakkad on may 25th 2013 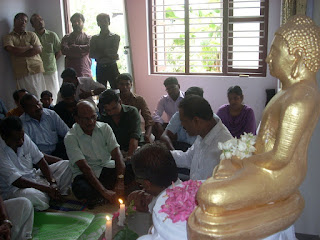 Posted by HARIDAS BODH at 1:35 AM No comments:


The golden Buddhist's life standards make harmony for oneself and others.
This layman's code of discipline = (gihi-vinaya) organize social relationships
so that they produce a society of happy being and beings... :-)

C. Avoiding the six channels leading to ruin apāya-mukha, lit: The mouth of the downfall:9: Being addicted to drinking alcohol and/or taking drugs.
10: Always revelling in party, nightlife, and careless company.
11: Being restlessly bent on empty entertainments and amusements.
12: Being addicted to gambling, betting, and gaming.
13: Associating with evil friends.
14: Being chronically lazy.

The Golden Buddhist Life Standards 1
Have a nice & noble day!

Friendship is the Greatest! Bhikkhu Samāhita _/\_ ]
http://What-Buddha-Said.net
Posted by HARIDAS BODH at 2:11 AM No comments:

Law 3: Maintain good and sound social relations in all 6 directions:
1st direction: How should Children behave towards Parents and Parents behave towards children?
Children should honour their parents by:
1. Having been raised by them, one looks after them in return.
2. One helps them in their business and work.
3. One continues & maintains the family line.
4. One conducts oneself as is proper for an heir.
5. After their death, one makes offerings, dedicating the merit to them.
Parents should help their children by:
1. Cautioning and protecting them from evil.
2. Nurturing and training them in goodness.
3. Providing a suitable and proper education.
4. Seeing to it that they obtain suitable spouses.
5. Bequeathing the inheritance to them at the right time.

2nd direction: How should Students behave towards Teachers and Teachers behave towards students?
Students should respect their teachers by:
1. One rises to greet the teacher when he arrives and shows respect towards the teacher.
2. One approaches the teacher to attend & serve, to consult, to query & to receive advice.
3. One listens well & pay full undivided attention so as to gain complete understanding.
4. One performs any practical task and runs errands for the teacher.
5. One learns the subject earnestly, giving this task of learning right priority.
Teachers should support his students by:
1. Teaching and training them to be good and skilful.
2. Guiding them to thorough & penetrating understanding.
3. Teaching the subject in full, holding nothing back.
4. Encouraging and praising the student's qualities and abilities.
5. Providing learning that both can make a living & induce behaviour entailing happy prosperity.

3rd direction: How should Husband behave towards Wife and Wife behave towards Husband?
A husband, one should honour and support the wife by:
1. One honours her in accordance with her status as a wife.
2. One does not disparage, criticize, undervalue or belittle her.
3. One does not commit adultery with any other women.
4. One gives her control of & responsibility for all the household affairs.
5. One gives her occasional gifts of ornaments and clothing.
A wife supports her husband by:
1. Keeping the household clean, proper and tidy.
2. Helping the relations and friends of both family sides.
3. Not committing adultery with any other men.
4. Safeguarding any wealth that has been acquired.
5. Being energetic and enduring in all her works.

4th direction: How should Friend behave towards Friend?
A real friend maintains his friendships by:1. He shares with them.
2. He speaks kindly to and about them.
3. He helps them whenever needed.
4. He is constant & faithful despite their ups and downs.
5. He is understanding and sincere.
Friends then reciprocate by:
1. Protecting their friend when he is off guard.
2. Protecting their friend's property when one is off guard.
3. Being a safe refuge and shelter in times of danger.
4. Not desert or leave their good friend in times of need.
5. Respecting all their friend's family and relations.

5th direction: How should Employer behave towards employees, and Employees towards employer?
1. The Employer assigns the work in accordance with the workers strength, sex, age, and abilities.
2. He pays them wages compatible with their work and adequate for their livelihood.
3. He grants them fringe benefits and provides medical care in times of sickness.
4. He shares with them a portion of any special profits that may arise.
5. He gives them appropriate holidays and suitable time to rest.
The Employee helps the employer by:
1. Starting work before the employer.
2. Stopping work after the employer.
3. Taking only what is given by his employer.
4. Doing the job well and always seeking ways to improve on it.
5. Spreading a good reputation about the employer and his business.

6th direction: How should the lay Buddhist behave towards monks and nuns, and they towards him?
The Lay Buddhist honours and respects the ordained Sangha by:
1. He acts towards them in goodwill.
2. He speaks to them with goodwill.
3. He thinks of them with goodwill.
4. He receives them willingly.
5. He supports them with the four requisites of almsfood, robes, shelter and medicine.
All Monks and nuns help the lay people by:
1. Protecting them from evil actions which inevitably produces painful consequences.
2. Encouraging them in goodness, which inevitably produces pleasurable consequences. .
3. Assisting them in all activities with kind intentions.
4. Making known to them the things they have not heard before.
5. Enhancing and clarifying those things they have already heard.
6. Pointing out the way to heaven, & teaching them the way to happy prosperity here & now.

Friendship is the Greatest! Bhikkhu Samāhita _/\_ ]
http://What-Buddha-Said.net
Posted by HARIDAS BODH at 2:09 AM No comments:

Who & How are the 7 types of Noble Persons?


The Blessed Buddha once explained:
Monks, there are seven types of noble persons existing in the world. What seven?

I, monks, do not say that the attainment of profound knowledge suddenly comes straightaway!
Gaining final knowledge is achieved gradually through steady progress by study, and meditation..
Source: Majjhima Nikāya 70. May this Way by our one-pointed effort become swift!

Friendship is the Greatest! Bhikkhu Samāhita _/\_ ]
http://What-Buddha-Said.net
Posted by HARIDAS BODH at 2:06 AM No comments:

Law 4: Helping all beings achieve their advantageous goals!One should help oneself, one should help others and one should help both oneself and others...
Helping oneself will develop one's life towards progress, prosperity, and happiness.
Helping others by inducing and encouraging them to develop their lives, gives same benefits.
Helping oneself and others creates a mutual goal and advantage for both parties.
This collective benefit, leads to happiness and virtue of the community & society.
An example is environmental conditions, which we all should help create and conserve
in order to help both ourselves and others to a happy & better future.
Helping all people is joining in constructively creating a social harmony and unity...
Helping all beings is expanding this gentle and subtle harmony universally!
The Four Principles for Help:
1. Dāna: Giving and sharing (helping through money and material goods).
2. Piyavāca: Kind, friendly & polite speech (helping through words & explanation).
3. Atthacariyā: Helpful bodily action (helping attaining goals through physical effort).
4. Samānattatā: Participation & assistance (helping with collective construction & problem solving).

The 3 Levels of Goals:

1. First level: Present benefits to be seen & utilized here and now (ditthadhammikattha):
a) Having good health, a strong body, freedom from disease, pleasant appearance, and long life.
b) Having work and income, honest livelihood, and economic self-reliance.
c) Having good status, being of good standing in the community.
d) Having a happy family worthy of admiration & respect.

2. Second level: Religious goals for further advantages (samparāyikattha):
a) Warmth, deep appreciation and happiness through faith of having a true ideal.
b) Pride in having a clean life, in having done only morally irreproachable deeds.
c) Gratification in a worthwhile life, in having made sacrifices and done much good.
d) Courage & confidence by having understanding to deal with problems & guide own & other's life.
e) Security and freedom from worry in having done good as an investment for the future life.

3. Third level: The absolute and ultimate Goal (paramattha):
a) Not wavering in face of common vicissitudes and inevitable changes.
b) Not being depressed, despaired, or distressed because of clinging to attachments.
c) Being assured, secure, calm, clear, cheerful, and mentally buoyant at all times.
d) Living and acting with wisdom, which looks rationally at all causes and conditions.
e) Approaching Nibbāna - the deathless element - the highest bliss - the final peace - the highest goal

One who is able to attain the second level of goals & upwards is known as a wise man (pandita).

The Golden Buddhist Life Standards 4!
Have a nice & noble day!

Friendship is the Greatest! Bhikkhu Samāhita _/\_ ]
http://What-Buddha-Said.net
Posted by HARIDAS BODH at 2:05 AM No comments:

What does Perfectly Self-Enlightened Mean?

The Blessed Buddha once said this:
Those who do not understand Suffering
Who do not know how Suffering comes into being,
Nor where Suffering ceases without remaining trace!
Who do not know this Noble Way & unique Method,
Which leads straight to stilling of all Suffering!
They are indeed lacking all mental release;
They are neither released through understanding;
Thus Incapable of making an end, stranded, helpless,
They tumble on in birth, aging and eternal decay...
But those who do understand this Suffering,
Who also know Craving as The Cause of Suffering,
And where Suffering ceases completely,
Who understand This Noble Way and Method,
Which leads straight to The End of all Suffering!
They are endowed both with mental release;
And also released through understanding!
Being thus ready and able of making an end,
They stop tumbling on in birth, aging & decay...

Friendship is the Greatest! Bhikkhu Samāhita _/\_ ]
http://What-Buddha-Said.net
Posted by HARIDAS BODH at 2:01 AM No comments:

How to recognize the 4 kinds of false imitating friends  (mitta-patirūpaka)?
I. The habitual cheater  who only takes from friends, has four features:
1. He thinks only of getting and rarely of giving
2. He gives only little when in the hope of getting much.
3. Only when he is pressed in danger does he help his friend.
4. He imitates friendliness only to promote his own advantage.

How to recognize the 4 kinds of true friends with a genuine goodness (suhada-mitta)?

II. The friend through thick and thin  has four features:
1. He confess his own secrets to his friend.
2. He keeps his friend's secrets safe and sound.
3. He does not desert or betray his friend in times of danger.
4. He will give even his own life for his friend's sake.

III The good counsellor  has four features:
1. He restrains his friend from doing evil or harm.
2. He encourages him to do good & accumulate merit.
3. He explain to his friend, what he has not heard before.
4. He points out the way to prosperity, progress and happiness.

Such are the 4 false and the 4 true friends. Please take note of that!
B. Allocating one's wealth rightly by intelligent earning, spending & saving:
1. One portion is to be used for supporting oneself, family, dependents, and for charity.
2. Two portions to be used for investment in one's business or owned structures.
3. Another portion to be put aside as savings for future needs.

Friendship is the Greatest! Bhikkhu Samāhita _/\_ ]
http://What-Buddha-Said.net
Posted by HARIDAS BODH at 2:00 AM No comments: