Buddha Sculpture at Mavelikara
The Buddha idols of Mavelikara and Karumadi in south Kerala are now well known all over the world. Today we see plenty of relics and ravages related to Buddhism and the Sramana tradition in Kerala scattered all over the state. Architectural and sculptural reminiscences are numerous apart from the vital linguistic and cultural imprints like the abundance of Pali (the ancient Buddhist Bahujan language) words in the present south Indian regional languages.

Karumady Kuttan: Half destroyed Buddha idol in Karumady near Ambalapuzha
The state is also known for the educational and health care achievements apart from its universal literacy. All these human development indicators are not just the product of 20th century evangelical Christian missionary activities and state welfare schemes but the lasting legacy of Buddhism, the democratic, egalitarian and inclusive way of living that shaped the cultural contours of Kerala from B C 3rd century to A D 13th century.

Nilamperur Pally temple: Converted to Hindu after Pallybana Perumal
Kerala is also known for its progressive left and democratic politics. This grass root level democracy and collective struggles of subaltern people are also a reminiscence of Buddhism that was the first missionary yet peaceful religion that welcomed women and outcastes to the mainstream community. The people or Bahujans who were defiant to Hindu Brahmanism after the destruction of Buddhism by Brahmanism were condemned as untouchable Chandals as outside the Brahmanic Hindu Chatur Varnayam after the devastation of Sramana tradition in Kerala. These Chandals or untouchable Buhujan masses were and still are the agents of Kerala social revolution or renaissance under the aegis of various radical social rebellions like the Narayana Guru movement, Ayyankali movement, Sahodara movement and various other progressive left and democratic processes in Kerala.

Buddhist Pagoda Shrine housing Karumady Kuttan, built by Dalai Lama
According to researchers, historians and thinkers like P C Alexander, P K Gopalakrishnan, Pavanan, Puthussery Ramachandran, Aju Narayanan etc. Buddhism was introduced in Kerala in the B C third century itself by the missionaries of emperor Asoka on their way down south to Sri Lanka which still is a Buddhist country. Jainism and Ajivaka philosophy also co-existed with Buddhism creating the great Sramana civilization of the South that has given birth to cultural classics like The Thirukural, Silapatikaram, Manimekhala and the whole canon of Sangham writing. The Buddhist, Jain and Ajivaka seers introduced the Brahmi script and the art of writing in South India. All the early inscriptions now available are written in Brahmi script in Tamil language. The ancient Tamilakam or Tamil country was a treasure house of Sramana heritage.
Almost all the current Savarna Hindu temples in Kerala now are modified Buddhist or Jain temples by coveted Brahmanism and its Padaja (Sudra or subservient Varna) forces. The brutal persecution of Buddhist monks/nuns and conversion of temples happened in seventh and eight centuries under the leadership of Sankara the furious advocate of Brahmanical propaganda and violence. He argued with other religious scholars, defeated them verbally and annihilated them and their religion forever. His brutal followers and henchmen also converted the seat of the defeated to that of Hindu Brahmanical temples with extended support from ruling classes.
He is also called Prachanna (pseudo) Buddha as he modified and disguised Buddha’s Sunyavada (rational theory) into the empire of the

A fake Buddha in Matanchery antique shop
Brahmanic self, the Advaita ‘theory’ that reiterated and enforced caste division and hierarchy with a peripheral and cunning shroud of unity that cheated the masses. Thirumulla Varam, Thottappally, Podiyil Mala, Sabarimala, Kodungallur, Thrissur, Kottakkal, Madappally and Bekal were world renowned Buddhist shrines of worship, learning, health care and nature conservation. In places like Mathilakam and Kiliroor there were even Buddhist and Jian universities and Research centres in Kerala in the early centuries of the first millennium that attracted intellectuals and students from all over the world.
Pally is still the most popular affix used along with place, plot and family names in Kerala, Tamil Nadu, Karnataka and Andhra. The Pali word Pally means a non Hindu/ Brahmanic place of worship. In the ancient times it denoted a Jain or Buddhist shrine. Buddhism guided culture and society in the south for more than a millennium. It was erased from Kerala through the barbaric and coveted Brahmanic invasion that happened from the fifth to eighth centuries under cruel and reckless royal patronage and usurpation with power.
Images and records of Buddhist persecution by the Brahmanic barbarians are still available in Kerala in the form of stone carved images, local subaltern orature and secret lore (Valath). The Hindu Brahmanic colonists burned the Pali canon and the sacred texts and knowledge systems of Buddhism in Kerala. These nomadic Aryans from the Vedic and Sanskritic clans of West and Central Asia introduced Sanskrit and Hindu religion in the South Indian Kingdoms. They found leverage in royal patronage through cunning usurpation and cheat. The legend of Onam and Maha Bali still articulates the historic deceit of Buddhist Bahujan culture by the Brahman dwarfs. Poets like Sahodaran Ayyappan has extensively written about the internal imperialism of Hindu Brahmanism in Kerala.

Vadayar Attuvela: A relic of Buddhist past
The Brahmans created the notorious sexual colonies among the Sudra women and used their male counterparts as foot soldiers who ensured the caste and Varna system, the practice of untoucahbility and pollution. The Sudras in return were given land and titles (as Nayar, Panikar, Thampy, Unni, Kaimal, Kurup, Menon etc.)with which they suppressed the local defiant untoucahable people having Buddhist lineage with bloody hands and weapons. These foot soldiers and menial hands of Brahmansim were absorbed to the Chatur Varnyam (fourfold Varna stratification of Brahmanical imagiNation comprising of Brahman, Kshatriya, Vaisya and Sudra) as the fourth and last Varna, the Sudra. The vast majority of people, the Dalit Bahujans were outside the cultural geography of Brahmanism as Chandals and Mlechas, as they are the former Buddhist and Jain population.
The Nayar dominance in Kerala history began in the middle ages with large scale Brahman settlements and militarization and still holds sway though they also want to be declared as a backward community now, as they still relish absolute power! According to state commission reports this power elites and historically advantageous group having less than 15 percent of Kerala’s population enjoy more than 32 percent share in government jobs. In higher education and universities it is more than 48 and in private owned print media and visual media it is almost 90 percent. Imagine the extent of Savarna Nayar hegemony in Kerala even today!
These henchmen of Brahmanism who cheated and killed their Buddhist, Ajivaka and Jain brethren to enforce Brahmanic caste and did the work of pimps by fetching their own women for the Brahmanic high priests with all the shameless pride of getting an elite alliance; are now hailed as the Samurais of Kerala by some fascist spokesmen of elitism who thrive in popular cinema and culture. This historical mediating middllemen are still the advocates of Gita classes, Veda and Vedantic obscurantism in Kerala and outside! They are the orchestrators of Hindu hegemonic discourses and the power heads of the Parivar forces all over the country allying with the Neo Kshatriya aspirants. They are also Hinduizing the Bahujan masses who are attracted to power and chauvinist social status! They need the numbers of Hinduized Bahujans for their pseudo majoritarian and fascist politics. It is an absurdity of history that some of them even today boast about their Brahmanical wedlock which was stopped just a few decades ago!
This Brahman – Sudra alliance or infamous Sambandham gave birth to the Manipravalam literature, the new Malayam-Tamil and later Malayalam and the Savarna elite culture of Kerala in the dark and dubious middle ages that Sanskritized and Hinduized Kerala elites and a lot of people. Even Syrian Christians boast about their Brahmanical connections more than 2000 (?!) years after conversion! Actually there were no Brahmins in the south in the A D first century! Then how could St. Thomas convert those absent Brahmans to Christianity? The coveted Brahmans came to Kerala only in the 4th or 5th century or later.
The power of Brahmanism and Hindu hegemonic discourse is that much tangible and an everyday reality in Kerala and India. This hidden Savarna elitism is the real culprit behind all the fascist pogroms and genocides in post Independent India. All the minority religions in Inida and Kerala like Jews, Muslisms and Christians still use the Pali word Pally to refer to their place of worship along with Jains and Buddhists in the south. Buddhism is making a second coming as an ethical philosophy and eco-spiritual alternative way of life all over the world and in India and Kerala in particular.
The historic affiliation to Buddhism in the philosophy and praxis of Narayana Guru the seer of Kerala modernity, his disciples and intellectuals like C V Kunhiraman, Asan, Sahodaran Ayyappan and now the new Ambedkarite Dalit movement in Kerala are significant. Dr Babasaheb Ambedkar’s illuminating subaltern hermeneutics of Buddhism in his masterpiece Bddha and his Dharma are also instrumental in the second rebellion of Buddhism against caste Brahmanism and social exclusion. Plenty of radical scholars and organic intellectuals in India and Kerala are now working on Buddhism like Gail Omvedt herself. It could be well assumed that Buddhism is emerging as the cultural and ethical alternative of the present and future all over the world and particularly in Kerala. The Bahujans in Kerala who lost their true Sramana legacy in the onslaught of Hindu Brahmanic internal imperialism are now recovering from the calamity of Brahmanism and its burden and looking forward to alternative paradigms and new ways of living. 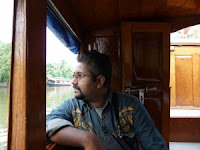